For those of you unfamiliar with the work of stand up comedian and cast member of Breaking Bad, Bill Burr off you go and rectify that failing immediately, for the rest of you here’s audio taken from his excellent podcast where the man himself cracks up during the reading of an advertisement for a company called Shari’s Berries.

That’s exactly what this video is, comedian Adam Buxton reading out YouTube comments in front of a live audience.

If that sounds boring then may we take this opportunity to remind you that this video features Adam Buxton. There, we thought so.

Here’s a video, which was kindly sent to us by honorary crew member Jeff Abraham, of comedian, actor and motor mouth Andrew Dice Clay ripping into the recent pop culture phenomenon that is Charlie Sheen, he also takes a swipe at Gilbert Gottfried, (the American comedian who was recently fired for tweeting jokes about the Japanese tsunami).

For those of you web pirates out there who have no idea who Andrew Dice Clay is allow us to briefly explain.

He was during the 90s the single biggest stand-up comedian in America selling out football stadiums and auditoriums thanks to his brand of crude, politically incorrect humour, (an American version of Bernard Manning if you’re from the UK), and was the only comedian in history to sell out Madison Square Garden two nights in a row.

He also went on to star in a few movies but his most famous role to date was that of Ford Fairlane in the Renny Harlan directed movie The Adventures Of Ford Fairlane. A film so unashamedly bad it’s become, over the years, one of our greatest guilty pleasures.

N.B. What the blue ball blazes has happened to The Diceman? He looks like some sort of washed out land pirate. Not that there’s anything wrong with that look. *(adjusts eye patch and rubber parrot on shoulder)*

Above is the newest video from French artist and prankster Rémi Gaillard, apart from running in contention for world’s greatest arsehole, he also produces pretty funny videos like this one. He hails from Montpellier and like the bastard child of Dom Jolly and Johnny Knoxville has over the years managed to irritate the entire local police force, proving beyond a shadow of a doubt that people who play golf definitely have no sense of humour. One thing is certain after watching his videos the French are far more relaxed about practical jokes. 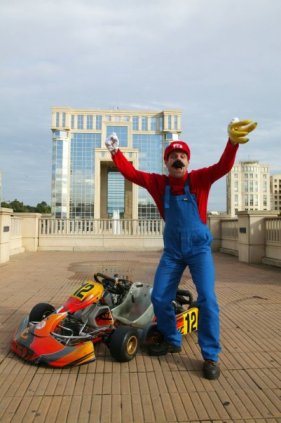 To celebrate his most recent video we’ve selected five of our favourite moments from the French humourist, who’s lawyer must be the hardest working man in France. (via Nimportequi)

With all the rain, snow, sleet and high winds currently doing the rounds across the world we thought we’d let Spike give you a more concise picture of the weather ahead.

We have fond memories of watching Leslie Nielsen in the cinema reducing us to tears of laughter with his loaded one liners and extraordinary range of physical comedy for a man of his age. Trying to get a breath in between the jokes during the first Naked Gun film is an experience we now use to gauge the actual funniness of present day comedy movies…unfortunately very few have matched that standard. He was very much a large part of our movie going lives as we were growing up and his character Lt Frank Drebben would always make us laugh no matter how cheesy or corny the wordplay joke was. Rather than witter on about how fantastic we thought the man was here are a few cherry picked examples of his greatness. RIP Leslie Nielsen.